Reality Bikes Classic Bike Ride and Brunch
Classic Bike Ride, Bike Show, and Brunch On the morning of Saturday the first of June 2013, join us for a leisurely ride through the Forsyth countryside on classic bicycles followed by a classic bike show and Brunch here at the shop. All bicycles older than 1999 are welcome, though the older the better. Classic wool jerseys and team attire strongly encouraged! The ride will commence at 9am from in front of Reality Bikes and consist of a 25ish mile conversational paced ride averaging 15-17mph. When we return, stands will be provided to display your classic steed in front of the shop for your fellow riders and casual bystanders to admire. While perusing the collection of classics and sharing stories of rides past, we will provide a brunch of wine and cheese. répondez s’il vous plaît by sending an email to duncan@realitybikes.com if you plan to attend so that we may plan accordingly!

Central Park Work Party
From RAMBO: It’s work party time at Central Park this Saturday April 20. We will be working on the new back hill trail and the new power line reroute. Please wear close toed shoes. RAMBO will provide lunch after the work party.
Directions:
· 400 N to exit 17
· Take left at the top of the ramp
· Go about 1mile turn left into the park
· Go straight to the back near the ball fields and the bike kiosk http://ow.ly/k3Bmr

Racing This Weekend
This weekend has a bit of everything. The Boone-Roubaix: The Hell of the High Country takes place in NC. Some of the best crit action comes to Anniston, AL on Saturday at the Sunny King Crit! (See the press release below). Sunday is the Foothills RR in Piedmont, AL.

Past Sunny King Champions Return To Anniston
Among the wealth of talent lining up at the 2013 Sunny King Criterium, are several of the race’s past champions. The event, which is set once again to take place at the center of Anniston, Alabama’s Noble Street Festival on the 20th of April, will be revisited not only by 2012 winners Issac Howe (Team Smartstop presented by Mountain Khakis) and Erica Allar (CARE4Cycling powered by Solomon Corp), but by a host of previous victors including Hilton Clarke and Karl Menzies (UnitedHealthcare), Howe’s teammate Frank Travieso and veteran women riders Laura Van Gilder (Mellow Mushroom Racing) and Tina Pic (Colavita-Fine Cooking). “Sunny King has that gradual uphill to the finish, which is a cool aspect of that course,” says 2008 winner Hilton Clarke. “It’s really a tough sprint out of the last corner. (But) our team has a lot of experience together at this point, so I think right now it’s playing to our advantage a bit. The team has a really good system going, and we’ve just hit the ground running this year.” Teammate Karl Menzies, who’s been a key part of Clarke’s unbroken string of victories this year, stood atop the Sunny King podium back in 2009, and fondly remembers the ambience on the night of his victory. “It’s a great atmosphere (there),” says Menzies recalling that evening four year ago. “I love that race. The people there are awesome. You never know what can happen at that race. I won out of a two-man breakaway with Kyle Wamsley, but people have won it from sprints, people have lapped the field, and people have won it from breakaways. It’s one of the courses where you have to be ready for anything.” That’s a sentiment echoed by 2007 winner Frank Travieso. “The year that I won my team controlled the race with one lap to go,” remembers the former Sunny King champion who has joined the Team Smartstop presented by Mountain Khakis team for this season. “Colavita was working during the last lap for Alejandro Borrajo, but I passed him right on the line. It was a big moment for me and my team.”

That same year Laura Van Gilder took the women’s title, and is returning to Anniston in 2013 virtually as solid as she has ever been. “My form is strong heading into Sunny King,” says Van Gilder, who’s had a number of top 5 finishes already this year. “I’m happy to remain competitive and enjoy mixing it up with all the women who are pedaling on the racing circuit. My sponsor, Mellow Mushroom, is in Anniston and I am very loyal to those roots and their support of me.” One of the women who she’ll be facing is Sunny King’s sole two-time winner Tina Pic, who has returned from retirement to reinvigorate the Colavita-Fine Cooking squad. “(The race) always has fantastic crowd support,” says Pic. “The course is great because of the uphill (rise) at the end, and the wins are always hard fought.”

Many of the same riders racing on Saturday night will also be participating in the annual Foothills Classic Road Race on Sunday the 21st and features over 3000 feet of climbing throughout the day’s effort. Heralded as a Top 10 event in Alabama by the state’s tourism bureau, those fans in attendance are treated to views from all around the course via a large full-color monitor.“I love the big screen (on the course) where you can see all the spectators screaming to the riders,” says Frank Travieso. For those not able to get to Anniston in person, the race will once again be seen can once again be seen online at a number of locations including:
http://www.SunnyKingCriterium.com
http://www.USACycling.org
http://www.VeloNews.com
http://www.CyclingNews.com
http://www.AnnistonStar.com

Tune in live from 12-9:30PM Central to catch all of the excitement from one of the most cherished and exciting cycling events on the U.S. professional calendar.

Mt. Tabor Work Party From Paulding SORBA
There will be a Mt Tabor work party 8:30-12 on Saturday to open a new corridor for the trail race in May. They will also do general trail work. Meet at the mountain bike parking lot on the right as you first enter the park. They will also be taking donations of dog and cat food as well as blankets and towels for the local animal shelter. http://www.pauldingsorba.org 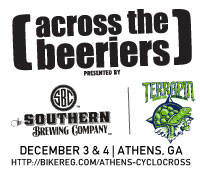 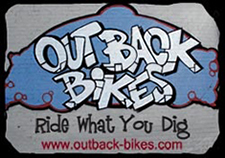 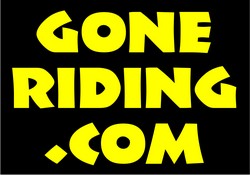 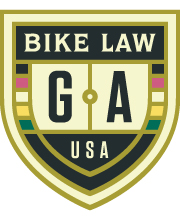